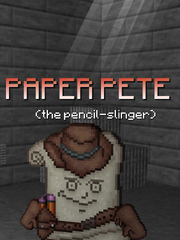 Paper Pete the Pencil-Slinger is a boss that can be encountered and fought in PickCrafter. He was added in Version 4.0.0. Defeating him earns the player Pencil Shavings, and one point towards the Paper Trophy.

Paper Pete cannot move, attack, or defend. He will show the player three symbols to trace on the bottom half of the screen. Successfully copying all three symbols defeats him. After five trophies, he will show 5 symbols, making the boss a little harder. Drawing a symbol makes a loss of time. You can use the eraser if your drawing is not counted, and you can only make 3 lines, removing your finger/mouse of the screen will delete one.

Clysm is a Paper Pete reskin in Scroll Event