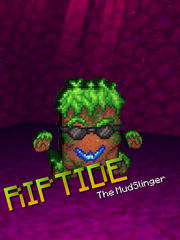 RipTide is a boss that can be fought in PickCrafter. Defeating him earns the player Riptide's TideMud, and one point toward the RipTide Trophy.

RipTide attacks by throwing a Magma Block at the screen, which the player needs to tap/click on to volley back to him. After enough volleys, he will be struck by the Magma Block and turn around, leaving him vulnerable to attacks for a short time. He will repeat this pattern until he's defeated or time runs out.

Missing a volley will give the illusion of the screen shattering, and decrease the remaining time. 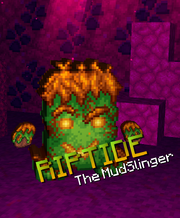 GoldTide is a variant of RipTide who can be encountered during the Lucky Event.

His quotes don't change. However, when defeated, he drops