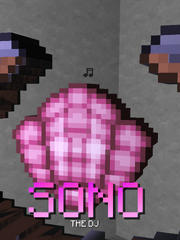 Sono the DJ is a boss that can be encountered and fought in PickCrafter. Sono is a DJ, whose body is currently unknown, due to the fact that he is behind his DJ Platinum. However, players can still see his hands in his dialogues. Defeating him in the Boss Rush earns the player a Boss Rush Chest, which contains a related item to him, the Sono's Speakers.

Sono's fight is made to be a musical one. A red marker will appear on the screen and rotates the whole turn until the boss is beaten. The first attack has a greenish-rainbow marker. The player has to hit the marker when the red one gets on it. If the player does not make mistakes, the speed of the red marker will increase and so the damage will rise. It is important to know that when the players taps by mistake, the red marker will reverse its rotation. Additionally, it is somewhat lax on the closeness. You may even half just an inch of the line in and it would still deal damage. Though potentially a bug, or an oversight, one may tap immediately as it starts and it would count.